Student loan debt in the United States has reached peak levels. With the rising cost of education creating serious financial struggles of grads, it’s no wonder the student loan debt crisis has been thrust into the national spotlight over recent years.

The outcome of the 2020 presidential election has the power to impact millions of people of all ages and socioeconomic backgrounds. Democratic candidate Joe Biden’s views on student loans differ vastly from Donald Trump‘s. All the while, borrowers are demanding the government to step in to alleviate some of the financial burdens they face.

These numbers demonstrate the widespread effect of student loan debt and how large a role the issue will play during the presidential election come November.

During a time of economic uncertainty, particularly in the wake of the COVID-19 pandemic, many borrowers are hoping for government intervention. The thoughts of Joe Biden on student loans revolve around offering relief to those who have seen little respite from the rising costs associated with a college degree.

Joe Biden, on student loan debt, said, “I believe there has to be more debt forgiveness for college loans, I think, more opportunity to go to college for free,” during an interview on The Daily Show.

The Democratic presidential nominee recently drafted a student loan relief plan that would include some student loan forgiveness and relief options.

One of Biden’s most significant proposals includes forgiveness for all undergraduate tuition-related federal student loan debt. This would apply to two and four-year public universities and colleges, with borrowers required to earn less than $125,000 per year to qualify.

According to Joe Biden, student loan borrowers who earn over $25,000 per year would pay no more than 5% of their discretionary income toward federal student loan payments.  Other proposals include no federal monthly payments or interest accruement for people earning less than $25,000 annually.

When it comes to Donald Trump on student loans, the solution is multi-faceted. Although Trump has taken steps to alleviate some of the burden of student loan payments amid the COVID-19 pandemic by signing of the CARES Act, some borrowers worry the relief may be short-lived.

The CARES act, a $2 trillion financial stimulus package, calls for a temporary suspension of federal student loan payments, a suspension of interest, and a halt of garnishment of wages, tax refunds and Social Security for student loan debt collection. These benefits are set to expire at the end of September.

As for long-term solutions for the student debt crisis, Donald Trump proposes a different set of tactics than Biden. For example, Trump has called for the repeal of the Public Service Loan Forgiveness program. The current program offers loan forgiveness for U.S. federal, state, local, or tribal government or not-for-profit organization employees who have made 120 monthly payments while employed full-time in a government role.

According to Trump, the current system gives unfair preference to public service employees. On the topic of student loan debt, Donald Trump proposes instead to implement a 15-year loan forgiveness program for all federal student loan borrowers.

Additionally, Donald Trump has proposed that the 2021 budget would also limit the amount of Grad PLUS Loans and Parent PLUS Loans available.

Trump is proposing significant changes to the federal student loan income-driven repayment (IDR) plan system. Under the current system, federal student loan borrowers are offered four IDR plans that allow them to make payments based on their current income level. These are the four plans currently offered:

Donald Trump’s plan for student loans seeks to reduce confusion by replacing these four plans with one new income-driven repayment plan. Many of the current IDR plans call for a payment of 10% of discretionary income over a period of 20-25 years. Trump’s proposed plan would set payments at 12.5% of discretionary income, but reduce the duration to 15 years for undergraduate loans, while extending it to 30 years for graduate loans.

Donald Trump vs. Joe Biden on student loans is a topic of much interest, and given the statistics on student loan debt in America, it’s easy to see why. The student loan crisis is currently affecting millions of people and plans for debt relief and systemic reform are important to many voters.

The Fed Is Likely Raising Rates in 2022: Impact on Student Loans

What Will the Government Do to Address Student Loan Debt in 2021?

President Biden Is Now in Office: What’s His Current Plan for Student Loans?

The Fed Is Likely Raising Rates in 2022: Impact on Student Loans

What Will the Government Do to Address Student Loan Debt in 2021?

President Biden Is Now in Office: What’s His Current Plan for Student Loans?

Can Your Parent’s PLUS Loans Be Transferred to You? 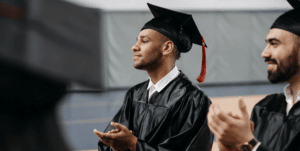 How to Apply for a Personal Loan